TFTNY: Protocols in the Making

Trained by Beatrice Catanzaro, co-facilitated with Kolar Aparna, and in collaboration with Mehbratu Efrem Gebreab
“You know, you really wake up to yourself through the other.” These words from a coloquial conversation—a reminder that “waking up” to oneself means, simultaneously, waking up to forms of coming together—inspired this training exploring relatedness; relatedness with...

Training for the Underwater(ed) Land

Trained by Urban Front
This training calls for the urgent formation of what Urban Front calls “parallel urban practices,” while taking aim at the structural and conceptual problem of contemporary urbanism: the increasing fragmentation, separation, and disintegration of an understanding of the city...

Trained by To Be Determined (Clara Balaguer, Sarafina van Ast and Gabriel Fontana)
Employing a temporal framework—exploring the past, inhabiting the present, imagining a future, and speculating about a dimension where time itself collapses—this training explores how minds, bodies, and voices can be used as tools for critical and physical self-defense...

(New) Formats of Care in Times of Violence

Trained by Patricia Kaersenhout
How does one care in times of violence? The practice of artist, activist, and womanist Patricia Kaersenhout can be seen as an ongoing search to respond to this conundrum, oscillating tirelessly between the space of art and that of everyday life. In this context, the starting point...

Trained by New Women Connectors
This symposium is for and by refugee and migrant women from all cultural backgrounds, to not only learn, connect and share, but also to build more inclusive policies; celebrating women’s resilience and ideas & strategies worth spreading. The symposium, which is part of the...

A Week By & For: Designing Inclusive Spaces

Trained by De Voorkamer
Which experiences can be created that spark cross-cultural interactions and openness to the other? What happens when designing spaces to be inclusive, working to make them personal, approachable, and culturally sensitive? These are the questions that Pim van der Mijl and...

Trained by Carmen Papalia
Open Access is a conceptual framework for accessibility developed by Carmen Papalia in response to institutional failures that he experienced as a recipient of disability support services. Rather than providing a “policy,” Open Access offers guidelines for person-to-person agreements for mutual care.

Decommodifying Housing How to Get There?

Trained by Homebaked Community Land Trust (CLT) (Britt Jürgensen and Marianne Heaslip), De Nieuwe Meent (Selçuk Balamir), de Kasko (Joska Ottjes), Refugee Collective We Are Here, Elke Uitentuis, Ethel Baraona Pohl, Cristina Gamboa, and Irene Calabuch Mirón
How to undo—and then get rid of—a model in which housing has become a commodity? Decommodifying Housing: How to Get There? is a training in which different collectives that work toward radical alternatives of making housing livable, affordable, and egalitarian share...

Trained by Fran Ilich
This training engages the learnings from the art-, coffee-, and media cooperative Diego de la Vega Coffee Co-op. As a pragmatical, representational, performative, aesthetic, plausible, communitarian, and utopian body, the Co-op started as a cooperative web-server and a...

Trained by Whitney Stark
This training considers the materiality of social structures and the idea of the extended body, a body with physical presence that constantly brings into being further collective social bodies, experiences, ways of being, and ways of thinking. Extended bodies are present in a room...

Trained by Laced-Up Project
The topic of consent has emerged strongly into public awareness thanks to the #metoo and other feminist movements. As consent has gained fresh prominence, it has perhaps moved away from a “no means no” to a “yes means yes” model. However, it is still unclear for many...

Trained by Chloë Bass
Each Step Yields Depth is a language-, translation-, and memory training based in the kitchen. The training invites participants to share words about food, recipes, cooking techniques, and kitchen stories from their culture, either as they live it in the present day, or as they remember...

Trained by Staci Bu Shea
More than Friends opens to modes of affinity and coalition from the standpoint that, according to Bu Shea, every “revolution starts at home.” The training sets out from three premises: first, the nuclear household is the site of the majority of abuse and sexual violence in the world...

Trained by Joy Mariama Smith
What does it really mean to be “mad” about study, and, moreover, about studying collectively, specifically in relation to community, art making, and social practice? What would studying be if it were a joyful public expression of collaborative learning? Joy Mariama Smith sets up...

Trained by Nancy Jouwe and Denise Valentine
Unforgetting & Reconnecting is a process of deep reflection, inquiry, and investigation, done to build—or peel back—layers of context in the explication of history and the (re)construction of personal and social identities. Encounters with painful aspects of history concerning race...

Trained by Adelita Husni-Bey
This training was in thinking with our bodies, using the body to research the norm, and produce the derailing of the norm. It was training to go off the script imposed by institutions—including museums, prisons, and heterosexual relations—as proxies for centers of power. Husni-Bey...

Trained by Gabriel Erlach, Utrecht in Dialoog, Jeanne van Heeswijk, BAK, basis voor actuele kunst
The City Staircase is a collective endurance performance that takes place over the opening weekend of the project Trainings for the Not-Yet. It unfolds in two parts, each a six-hour relay of conversations with and between Utrechters about the future of their city.

Trained by Stranded FM
Stranded FM is an “Unconventional Online Radio Station", founded in 2015. Stranded FM strives to provide a stage for the (as of yet) unknown Utrecht music scene, and connect its broader cultural landscape. At Trainings for the Not-Yet they hosted Listen/Re:listen (2019), a radio installation which and complements both the exhibition and (their) trainings.

Trained by Jeanne van Heeswijk
Public Faculty uses strategies to rethink, redefine and re-enter public space through collective cultural action. The impetus behind Public Faculty is to learn from a place through a process of exchanging knowledge and cohabitation, and by listening to people describing their daily conditions in which they often feel trapped.

An exhibition as a series of trainings for a future of being together otherwise, convened with a multitude of collaborators by Jeanne van Heeswijk and BAK, basis voor actuele kunst, Utrecht

The forthcoming culmination of this trajectory, Trainings for the Not-Yet, is an exhibition that evolves througha series of trainings organized in weekly chapters. The trainings range from “dreamscaping” to radical listening, from creating sanctuary to enacting radical care, from fighting housing struggles to building solidarity economies, and from composing intersectional alliances to becoming collective. They take place amid and with artworks by van Heeswijk as well as by an array of international artists engaged in social change and modeling collectivity. Van Heeswijk sees these works as learning objects. Meant to be used and accommodated by and in the trainings, they are living repositories of knowledges, stories, and experiences; the tools-in-wait for activation in difficult conversations and joyful praxis; and the archives of past and future anticipations of what “we” want to become when practicing visions of transformative justice, equality, dignity and love, care, resilience, collective power and sharing, and the relationality spawning alternative possibilities. Van Heeswijk’s works include objects and environments from some of her pivotal past and ongoing projects, including Philadelphia Assembled, Philadelphia, 2014•2017; Homebaked, Liverpool, 2010•ongoing; and Public Faculty Series, various locations, 2008•ongoing. Other learning objects comprise works such as Patricia Kaersenhout’s Formats of Care in Times of Violence, 2019; Adelita Husni-Bey’s Agency, 2014; Carmen Papalia’s, White Cane Amplified, 2015; Ultra-red’s Protocols for the Sound of Freedom, 2012; Black Quantum Futurism, Time Travel Experiments, 2017; and Adrian Pipers’s Funk Lessons, 1983, among others. 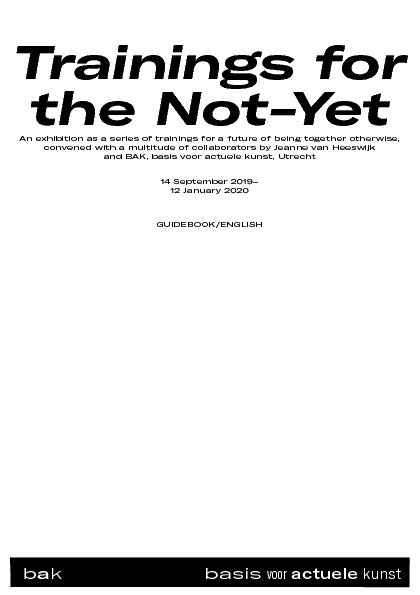 TEXTS:
Maria Hlavajova and the BAK team in consultation
with contributors to Trainings for the Not-Yet, unless
otherwise stated; contributors’ biographies compiled by
Irene Calabuch Mirón, Sanne Coopmans, and Mariëlle
S. Smith